Welcome to the past performances archive of the Virginia Chamber Orchestra.  The VCO is proud to have celebrated fifty years of fine performances and looks forward to many more years of memorable concerts. We hope you’ll be joining us for concerts and special events throughout this exciting season.

is Principal Bassist, musician of the NSO. In 1982 he was chosen by Music Director Mstislav Rostropovich to join the NSO's bass section, becoming the orchestra’s youngest member at age 21. He was promoted to Assistant Principal in 1984 and Principal Bass in 1996 under Music Director Leonard Slatkin.

He has appeared as a soloist with the NSO in performances of Mozart’s Per queste bella mano, Paganini's Moses Fantasy, and Koussevitsky's Concerto for Double Bass. Most recently, Mr. Oppelt performed Bottesini’s Grand Duo with Irina Muresanu and the Arlington (VA) Philharmonic. Chamber music collaborations include Yo-Yo Ma, Hilary Hahn, Guarneri String Quartet, and Kennedy Center Chamber Players. He attended the University of North Carolina School of the Arts and enjoyed summers at Brevard and Tanglewood Music Centers.

In 2007, Mr. Oppelt released a CD entitled The Double Bass -Robert Oppelt and Friends through MSR Classics which features ensemble works with the double bass. The CD was praised by Fanfare Magazine as “superbly executed by a crew of fine musicians.” A follow-up CD (called “Encore!”) was issued in 2019. 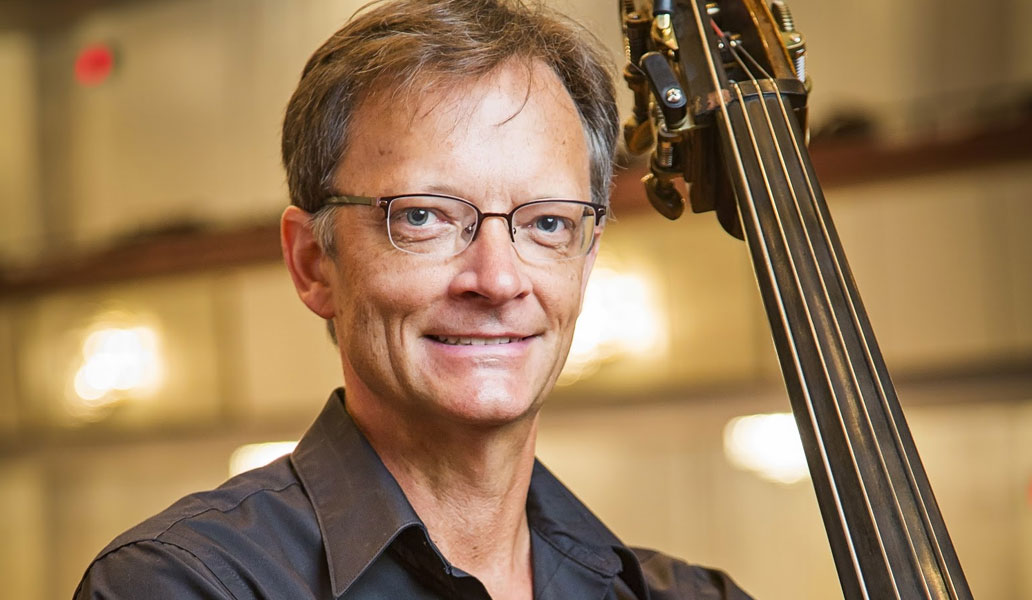 is a multi-woodwind instrumentalist specializing in saxophones, clarinet, and flutes. He joined the Glenn Miller Orchestra immediately after graduating from college. Known as a “ghost band,” performing under the original name of the deceased leader, it presents an average of 300 live shows a year.

After two years of traveling the world performing for thousands, Axelrad joined The Airmen of Note, the premier jazz ensemble of the United States Air Force. It was formed in 1950 to continue the tradition of Major Glenn Miller’s Army Air Corps dance band. Their musical excellence has led to many collaborative performances and recordings with such luminaries as Dizzy Gillespie, Joe Williams, Sarah Vaughan, and Doc Severinsen. In 1990, they established the Jazz Heritage Series, featuring the “Note” in concert with legendary icons of jazz. The Jazz Heritage Series is broadcast to millions over National Public Radio. One of the group's recent holiday recordings, "Cool Yule," reached #2 on the Jazz Week jazz chart. 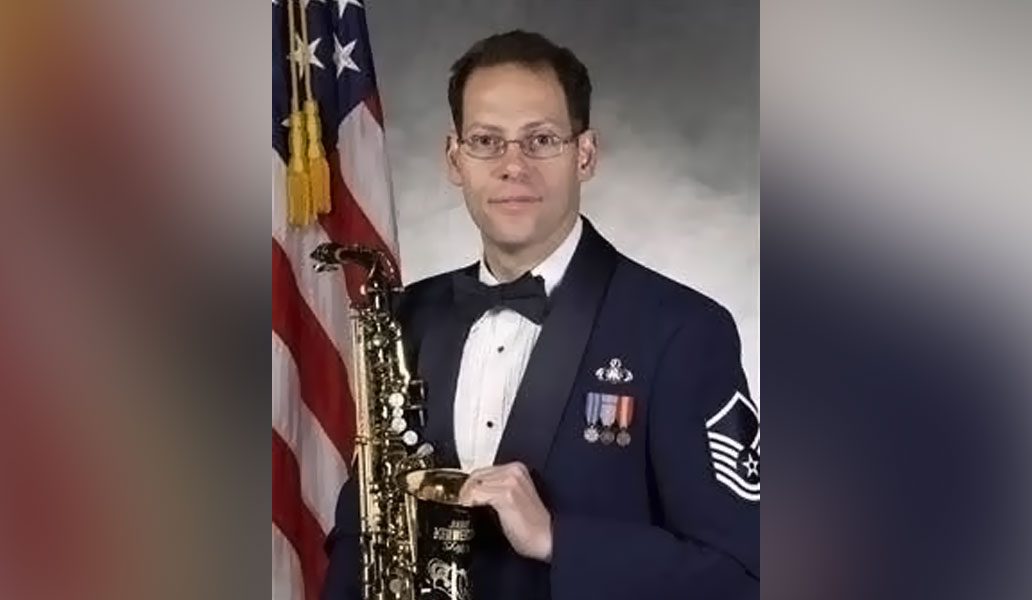 guitarist has been a member of The U.S. Army Band, Pershing's Own since August 2018. Prior to joining Pershing's Own at the age of 19, he attended the Manhattan School of Music as a student of Rodney Jones. At the age of 15, he recorded his solo CD album, "Out of Nowhere." At the age of 16, he was selected as a Strathmore Artist in Residence and presented several concerts throughout the year and recorded his second album, "Looking Both Ways," featuring guitarist Steve Abshire, bassist Tommy Cecil, and mandolinist Danny Knicely. Knutson has been a featured artist at several jazz festivals including Richmond Folk Festival, True Blue Jazz Festival, Syracuse JazzFest, and Savannah Folk Festival. Knutson is a native of Berwyn Heights, MD, and graduated from the Science and Technology Program at Eleanor Roosevelt High School. 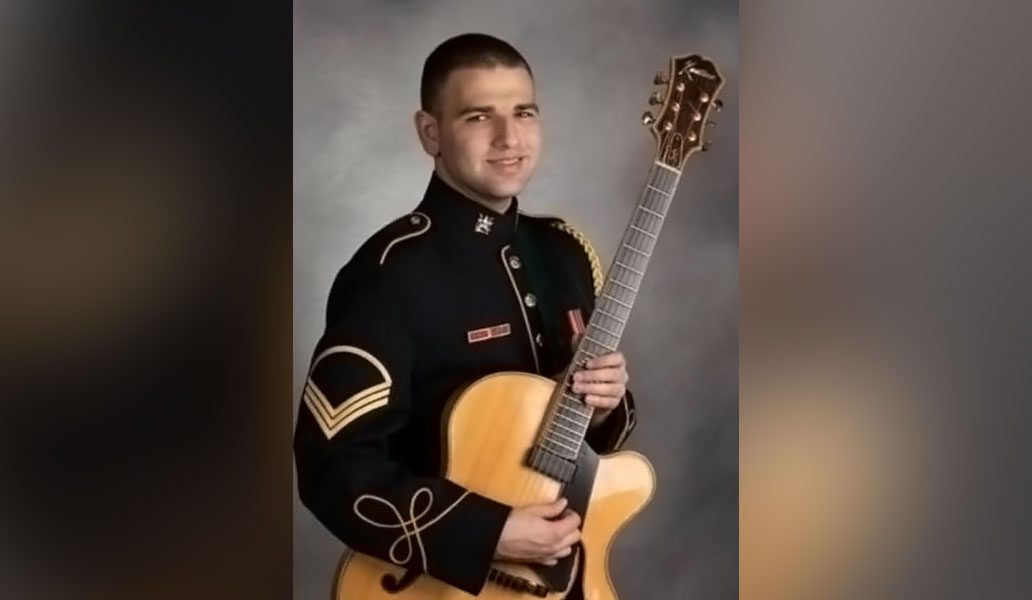 is a pianist, composer, teacher, and chamber musician. She received a Bachelor of Arts Degree from the National Taiwan University and a Master of Music in Piano & Composition from the University of West Texas. Special graduate studies at The Peabody Conservatory of Music included piano, composition, and chamber music.  Ms. Chang has studied with Sacha Gorodnitzki and Leon Fleisher, among others. Li-Ly Chang has given recitals, lecture-recitals, workshops, and performed concertos in Asia, Europe, and the U.S. Currently, she teaches piano, and Music Appreciation at Montgomery College and she has served as Director of the International Young Artist Piano Competition, Washington DC. 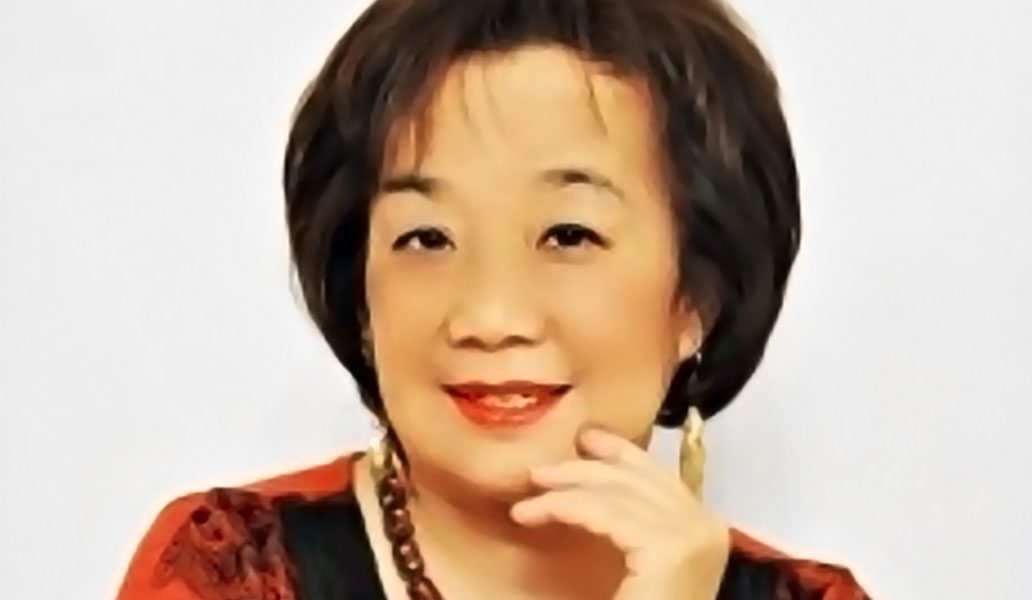 An accomplished and popular American composer, Charlie Barnett is the winner of numerous awards for his film scores, including the Rome International Film Festival’s Jerry Goldsmith Award. Barnett also writes music for television; his credits include Saturday Night Live, Weeds, Royal Pains, and Archer. Barnett’s lively orchestral and chamber works are performed both nationally and internationally. Notable collaborations include a spoken-word piece written and performed with Dr. Maya Angelou.

As a producer, Barnett has recorded scores of pop and jazz albums for labels including Def Jam and Elektra. And as a performer, he plays guitar and piano for Chaise Lounge, an eclectic jazz band that frequently appears on the national college radio charts with his original compositions. Barnett has also been heard as an occasional commentator on NPR. His essay “Hitching a Ride with Junior McGee” was included in the network’s Classic Driveway Moments compilation.

All audio and video clips are the property of their respective owners. All company names used on this website are for identification purposes only. Use of these names, logos, and brands does not imply endorsement. 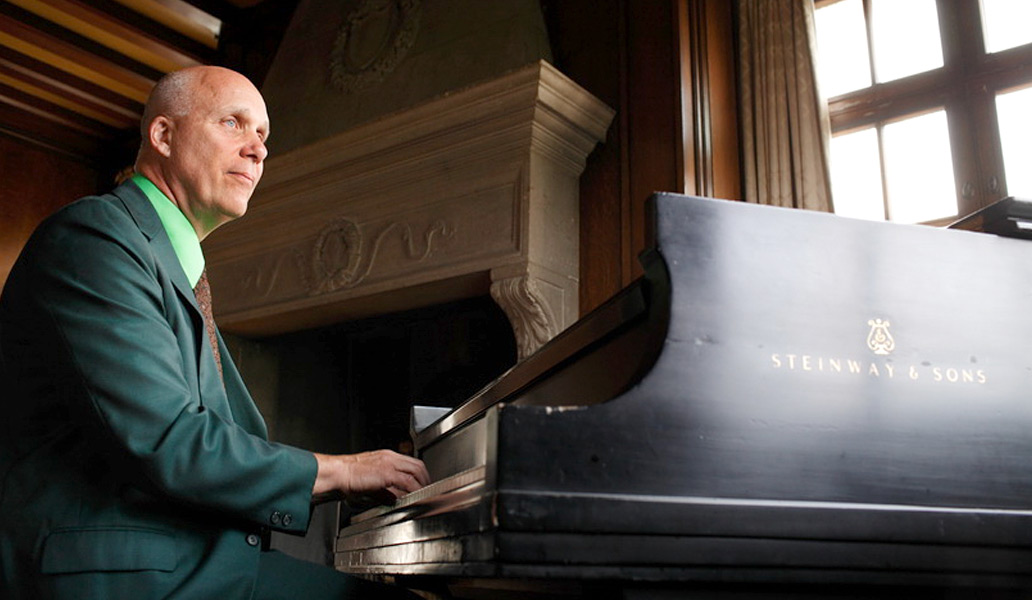 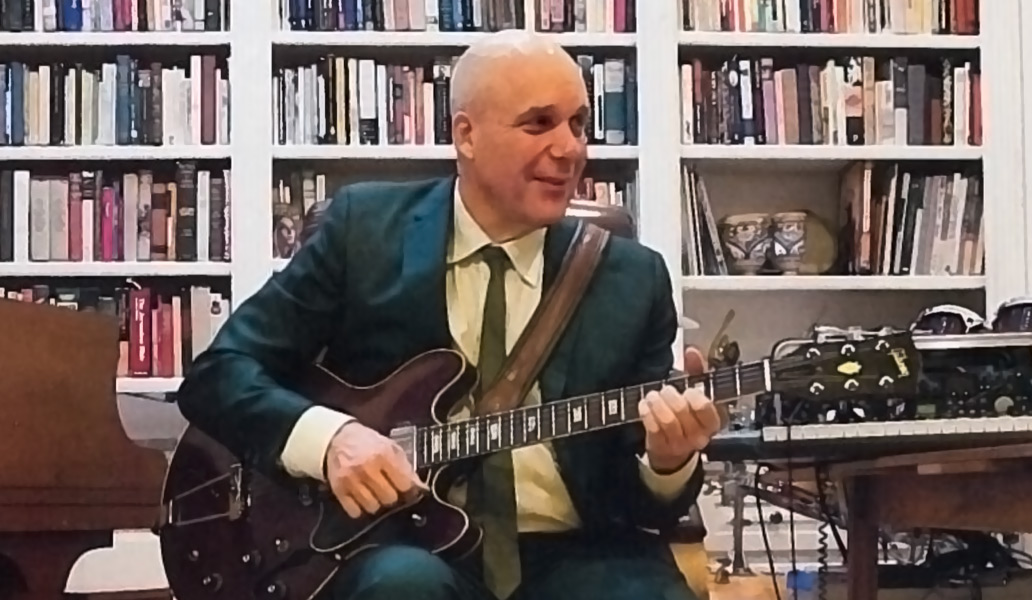 Dennis M. Layendecker; D.M.A.; Col. USAF (Ret.), is the Director of the George Mason University School of Music. He holds the Heritage Chair in Music and serves as Director of University Orchestras in the College of Visual and Performing Arts (CVPA), positions he has held since joining the faculty in August 2009. The Heritage Chair in Music was established in the 1980s by former Mason president George Johnson and his wife Joanne as a way of promoting the arts on campus and within the community.

During his 26-year Air Force career, Dr. Layendecker served as a band commander, conductor, artistic director, pianist, public spokesperson, educator, and diplomat for the Air Force at home and abroad. In July 2002, then Colonel Layendecker assumed command of The United States Air Force Band, Washington, D.C. As part of his duties, he provided direct musical and ceremonial support to the President of the United States and his Cabinet, members of Congress, and other high-ranking civilian and military leaders nationally and internationally. In addition to his duties at the USAF Band, from December 2007, he also served as the Chief of Music for the Air Force. In this capacity, he advised the Secretary of the Air Force Public Affairs leadership on music policy, officer hiring, development and assignments, force structure, and total force integration of Air Force active duty and Air National Guard musical units. During his military career, he led more than 6,000 musical performances worldwide in support of public outreach, community relations, troop morale and welfare, and recruitment and retention programs for the Air Force and Department of Defense. He officially retired from the Air Force in late August 2009.

Dr. Layendecker is a graduate of the American Conservatory of Music in Chicago, where he was awarded a Bachelor of Music Education in 1975. He began his conducting studies in 1977 while on full piano scholarship attending the Royal Conservatory of Music in Brussels, Belgium. He subsequently augmented his conducting studies during summer masterclasses at the Academia Musicale Chigiana in Siena, Italy, and at the Vienna (Austria) Academy of Music. In 1981, he earned a Master of Music in Orchestral Conducting from Northwestern University in Evanston, Illinois, and in 1988, completed a Doctor of Musical Arts in Conducting at the Catholic University of America in Washington, D.C. Prior to joining the Air Force, Dr. Layendecker served on the music faculties of The American Conservatory of Music, Chicago, Illinois, and Eastern Washington University in Cheney, Washington.

He was inducted as a member of the American Bandmasters Association in 2006. He has remained active as a conductor and clinician throughout his professional career.

During his distinguished career in the Air Force Dr. Layendecker led many of America’s finest musicians throughout the United States, Asia, the United Kingdom, and Europe—from Los Angeles to New York, Vienna to London, and Oslo to Tokyo. Gifted in foreign languages, he is fluent in French and functional in German and Italian. He has performed in such notable venues as Washington D.C.’s National Theatre and D.A.R. Constitution Hall; Kodak Theatre in Hollywood; Semper Opera, Dresden; Neues Gewandhaus, Leipzig; Royal Albert Hall in London; Alte Opera, Frankfurt; and the Beethovenhalle in Bonn. He has led his ensembles before numerous world leaders to include seven American presidents, Queen Elizabeth of England, and Pope John Paul II. His radio and television broadcast credits include appearances on BBC, German Radio and Television, Polish National Radio, Radio Luxembourg, RAI Italy, and public radio and national television across America.

A native of Springfield, Illinois, Dr. Layendecker resides with his wife Myriam in Burke, Virginia. They have been blessed to raise six children, and late in 2009 welcomed their first grandchild, Simon Peters. 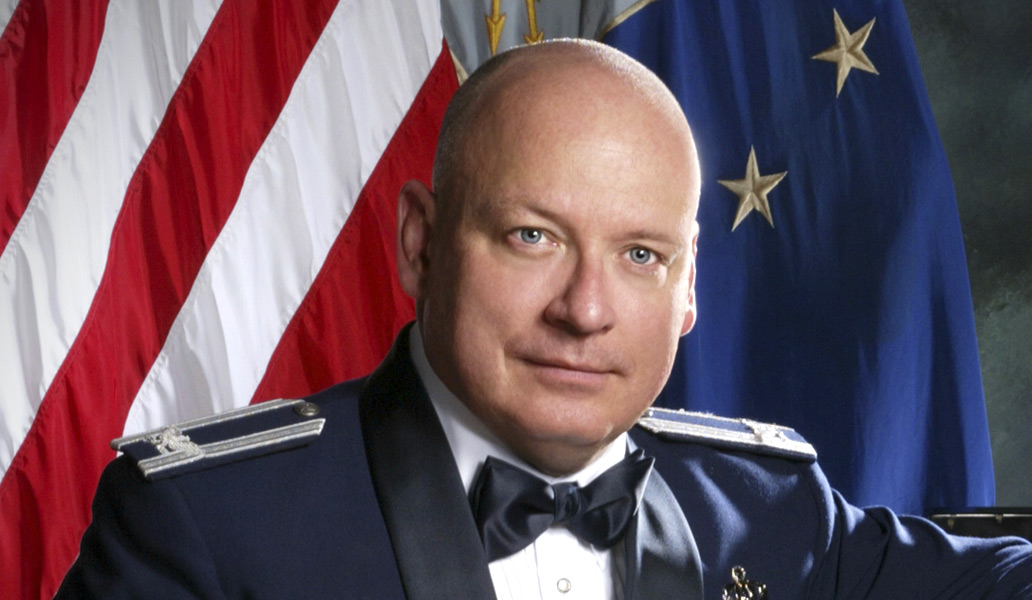 The Airmen of Note is the premier jazz ensemble of the United States Air Force. Stationed at Joint Base Anacostia-Bolling in Washington, D.C., it is one of six musical ensembles that comprise The U.S. Air Force Band. Created in 1950 to continue the tradition of Major Glenn Miller's Army Air Forces dance band, the current band consists of 18 active duty Airmen musicians including one vocalist.

Through the years, the Airmen of Note has presented its own brand of big band jazz as well as more contemporary forms of jazz to audiences via annual tours across the United States, deployments around the world, and local performances throughout metropolitan Washington, D.C. Their commitment to musical excellence has earned the respect of the foremost jazz artists from around the globe, leading to many collaborative performances and recordings with such luminaries as Dizzy Gillespie, Joe Williams, Sarah Vaughan, and Doc Severinsen. In 1990, the Airmen of Note established the Jazz Heritage Series, featuring the “Note” in concert with legendary icons of jazz.

The Jazz Heritage Series is broadcast to millions over National Public Radio, independent jazz radio stations, satellite radio services, and the Internet. In addition, the “Note” produces and delivers recorded music to millions of fans worldwide through hundreds of media outlets. One of the group's holiday recordings, "Cool Yule," reached #2 on the JazzWeek jazz chart.

As part of The U.S. Air Force Band, The Airmen of Note honors those who have served, inspires American citizens to heightened patriotism and service, and positively impacts the global community on behalf of the U.S. Air Force and the United States. The excellence demonstrated by these Airmen musicians is a reflection of the excellence displayed by Airmen stationed around the globe. Each member is proud to represent all Airmen, whose selfless service and sacrifices ensure the freedoms we enjoy as citizens of the United States of America.

All audio and video clips are the property of their respective owners. All company names used on this website are for identification purposes only. Use of these names, logos, and brands does not imply endorsement. 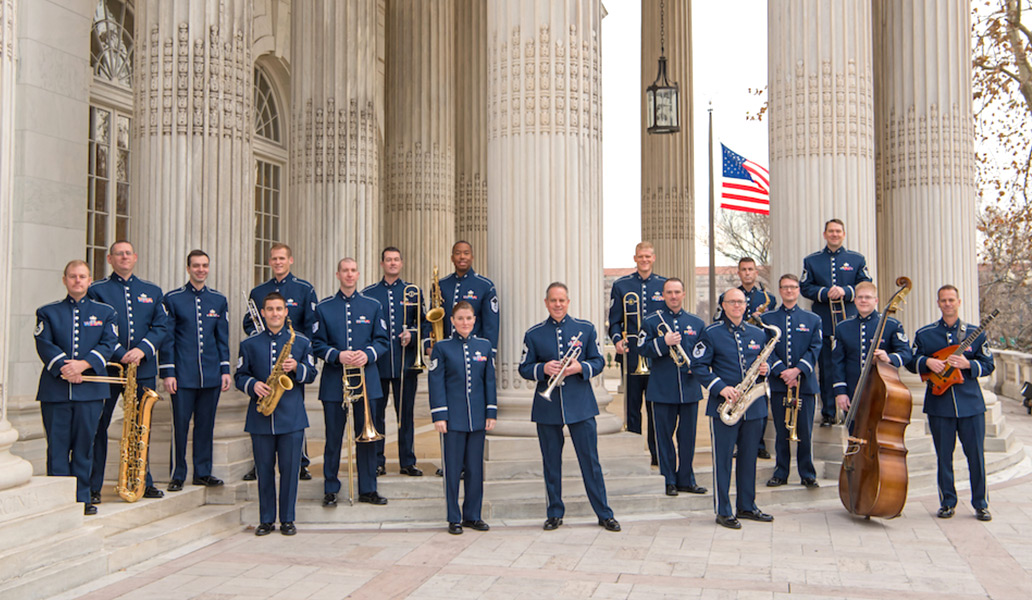 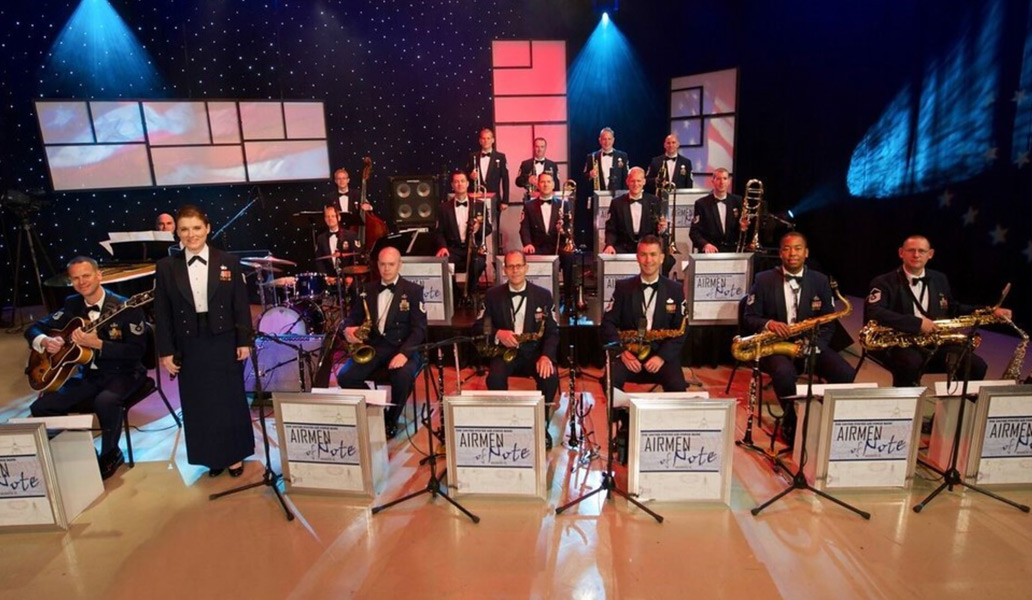 Pro Coro is a select group of singers drawn from the Alexandria Choral Society (ACS). Both organizations are conducted by Brian Isaac. The Society aspires to enhance the cultural life of the city of Alexandria and surrounding communities by presenting diverse and engaging musical programs at the highest artistic level.

ACS consistently offers meaningful and exciting musical experiences to both singers and audiences through a commitment to a diverse repertoire, understanding through education, and performance excellence.

The ACS strives to enhance the cultural life of the city of Alexandria by blending individuals into one voice - and together making music. 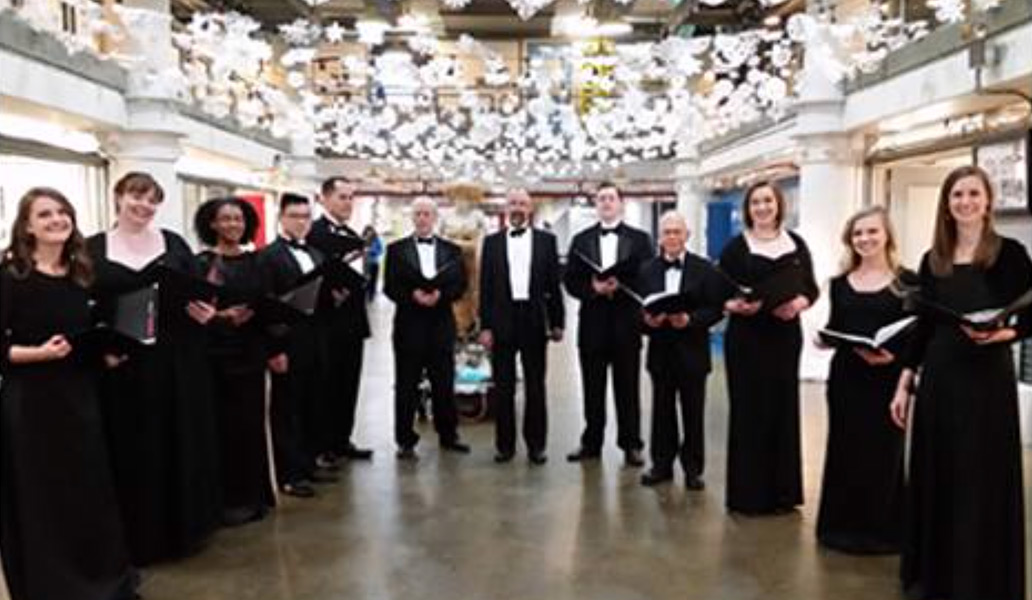