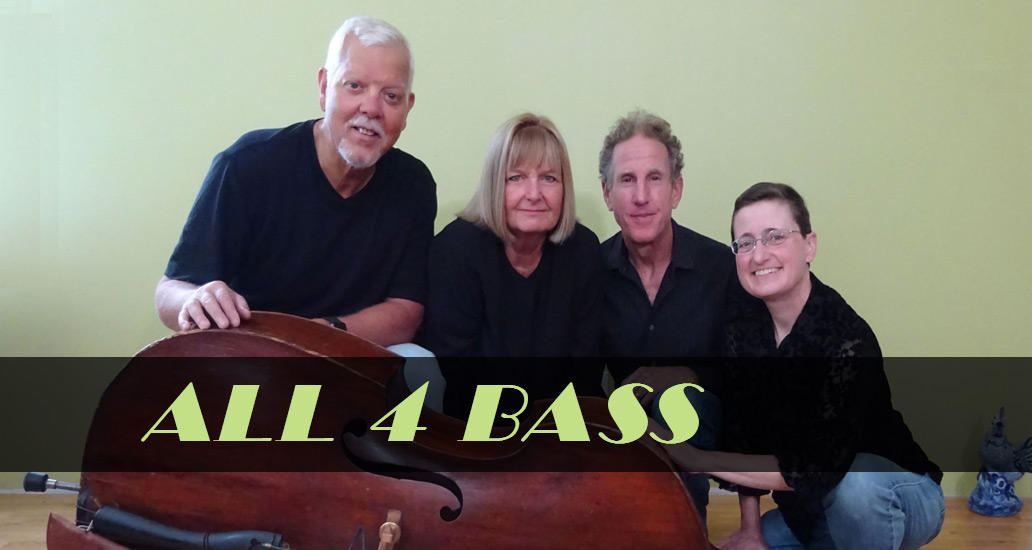 Offering an eclectic selection of music from Classical to Jazz to Swing to Pops.

Chris Kosky has been playing Double Bass and Electric Bass for 43 years and loves playing a variety of musical styles.  She has a Bachelor of Music in Jazz and Studio Music from the University of Cincinnati’s College-Conservatory of Music and a Master of Music in Jazz Studies from Indiana University.  Chris was a member of The United States Air Force Band from 1993 to 2015, is a life member of the International Society of Bassists, and currently enjoys freelancing and teaching in the Washington, D.C. area.  She recently published a Double Bass method book called The Thumb Transition Zone.

Cyndy Elliott is a life-long resident of the Washington DC area and currently works as a freelance bassist, performing many different styles of music in big bands and combos, orchestras and chamber ensembles, and as a theater pit musician.  She has had the honor of working with several renowned musicians from the big band era, including Tex Beneke, Maxene Andrews, and the Ink Spots, in addition to doing short tours with current versions of the Artie Shaw, Harry James, Jimmy Dorsey, and Les Brown orchestras and longer stints with the big band show “In the Mood” and the “Sister Act” national tour.  Cyndy has also worked throughout Europe and the Caribbean as a cruise ship musician.  She currently co-leads the jazz octet Swingtopia, and performs with a world music group called Trio Trela, along with the Abbey Road Jazz Ensemble, a quartet which creates jazz arrangements of Beatles tunes.

Jon Nazdin is a native of Washington, D.C.  A graduate of The Berklee College of Music, he plays all genres of music on double bass and electric bass.  Noteworthy highlights include working with Barbra Streisand, The Three Tenors, George Benson, Doc Severinson, Yoyo Ma and his Silk Road project, Denise Graves, and Branford Marsalis.  Mr. Nazdin has appeared on numerous “indie” recording projects.

Jim Scotti, a Washington D.C. native, has worked with artists ranging musically from Chuck Berry to Charlie Byrd.  Playing upright and electric bass, Mr. Scotti has made a living with his versatility of styles.  He has just celebrated twenty years as an adjunct faculty member of Montgomery College as the jazz bass instructor.

Note: The VCO does not mail tickets; tickets may be picked up at the concert.

BACK TO EVENTS
PROGRAM

Another unique Cabaret at 1st Stage performance
Play it LOW.. Play it COOL

This wonderful quartet of basses makes truly amazing music! Offering an eclectic selection of music from Classical to Jazz to Swing to Pops
Your table's waiting!

After concert reception with complimentary Champagne